Join one of the fastest-growing adtech startups. We’re hiring!

How to manage incremental reach.

The rapid emergence of CTV has been the lightening rod in exposing the gaps in existing cross-media measurement methodologies, especially for TV, creating the urgent need to have real data on the audience and critically the potential to add CTV incremental reach to campaigns.

After two solid years of measuring CTV campaigns, it is now accepted, unequivocally, that CTV does add exclusive, incremental reach to Linear TV campaigns and single-source cross-media data analytics is the proof of it.

The issue now is how to manage CTV to know how best to optimize budget allocation across all TV. And this needs accurate, high-quality campaign measurement data, and a discussion on definitions.

What is CTV and how does it work?

CTV or “connected television” is delivered to the TV screen through an internet-enabled television set, whereas linear TV is TV programming delivered through a traditional TV operator platform via a set-top box. The definition, however, must be consumer-focused, not based on how the programming, the advertising that goes with it, and how they are delivered.

The arrival at the center stage of the catch-all CTV audience in the TV world not only needs better understanding but also demands better definition to be actionable in planning.

As an advertiser in 2022, the heightened need to track reach and activation opportunity offered by the newly arrived CTV audiences prompts the insightful question “What do we actually mean by Connected TV” (especially if they are serious about optimizing spend across all the fragmented TV audiences that now comprise the holistic view of TV).

The interest in understanding the accelerated fragmentation of the traditional linear TV audience to new viewing devices, and learning how to directly link offline and digital TV, to retail footfall behavior, quickly precipitated the need for advertisers to get to grips with how to follow their audience into these emerging platforms to maintain and grow 1+ reach.

In hindsight, it is easy to see how CTV was conveniently defined in advertising circles by the screen on which the streamed TV content was viewed (very much part of “digital” and mobile planning teams at the time, which is not that surprising). Therefore, connected TV was seen just as another screen, like a desktop, a tablet, or a Smartphone screen, another device with a screen that happened to be a TV.

Furthermore, because emerging CTV opportunities for advertisers were being managed in the digital camp in most agencies, CTV found its way onto media plans as part of extending the digital (online/social) audience, not the TV audience. Thankfully for advertisers, it’s much clearer today for agencies that we are talking TV audience when talking CTV, and agency structures are starting to reflect that to overcome the gap in measurement and planning. For some advertisers, not only were different agency teams managing AV and digital, but those teams were also in different agencies so joining the TV optimization dots was even trickier, to say the least.

For the viewer watching a program on a smart TV app, the ad experience will of course be no different from that on their normal linear TV services. There is a difference, however, for the advertiser between CTV and linear TV. Crucial in growing 1+ reach, including CTV on the media plan means they can now target extended reach of their audience with the same ads as Linear TV, or maybe even specifically targeted ads.

The power of CTV advertising also extends to allowing brands to directly target their audience with precision on smart TVs through TV apps and on other OTT devices like Roku. And even develop ad-funded programming (AFP), also known as branded content, to target those specific audiences on CTV as CTV matures further as the audiences continue to segment and grow.

As CTV inventory continues to grow, this opportunity is game-changing for advertisers tracking their fragmenting audience to both optimize reach and drive brand KPIs.

To go on that journey with confidence, advertisers need credible audience data for CTV. Not just for incremental reach but also for empirically understanding unduplicated overlap reach between channels on a campaign. This is now available through advanced ad measurement solutions on the market to make it simpler to plan advertising on CTV as part of a single campaign on TV. This requires CTV to be included in the TV planning process and, of course, for that to be data-informed with the highest quality data available. This must be the way forward and especially if deciding how best to effectively spend a media budget is the question. Which it is.

The importance of CTV incremental reach in cross-media advertising campaigns

The recent urgent call for a single source cross-media audience measurement methodology for TV advertising campaign measurement has increased manifold, and rightly so. It has become an even hotter topic because of CTV. Over that time, the happy fact is that accurate numbers on CTV incremental reach have allowed many forward-looking brands to step up their understanding of their fragmenting audience and plan accordingly.

Real-campaign industry data collected over the past two years has proven that not only there is an audience on CTV but also that it is anything between 30-50% purely incremental to Linear TV. In other words, 30-50% of the total reach on CTV is incremental and exclusive (and this is even more so for the harder to reach younger audiences). 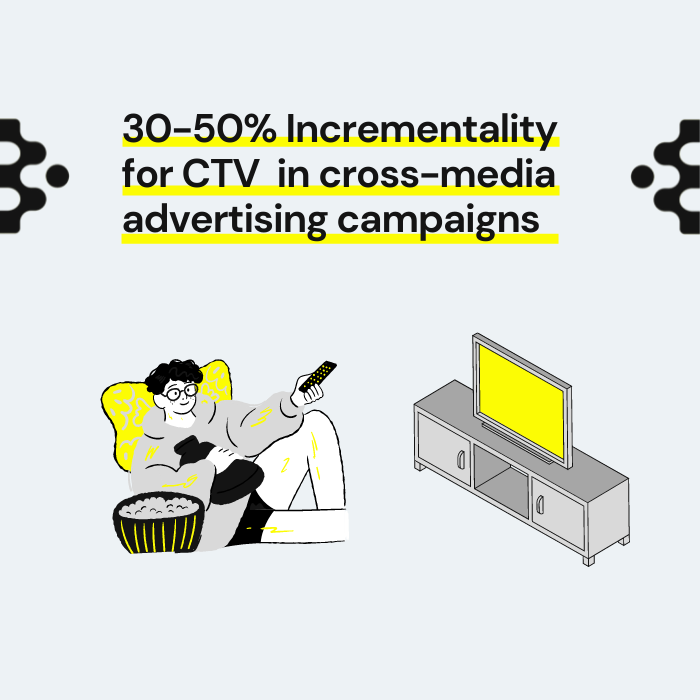 The fact that solid data exists on CTV incrementality, is leading clients to go further and take the lid further off on the CTV audience and start to understand what we mean by CTV in measurement. What is CTV and what isn’t? Are BVOD and AVOD also CTV? And so on.

The now proven ability to build the exclusive incremental reach of campaigns makes CTV advertising so essential to advertisers.

This pattern has created the current curiosity to understand CTV better, to define it better and that indicates that some advertisers are ready to go harder at optimizing for this audience now that incremental reach is proven.

To drill down further on understanding how brands can optimize incremental reach, requires more clarity on the make-up of the CTV audiences who are seeking out new content on different channels and platforms on the big TV screen and impacting the linear TV audience. Knowing where the audience is migrating to, will take the focus on CTV advertising effectiveness to a new level of planning quality and utility. Now suitably armed with the first tranche of real data on what was known as CTV over the past two years, to go further on the measurement journey, CTV, cannot be seen as a channel. Like Linear TV, it’s a world of viewing options where the viewer can settle to watch the content of their preferred choice. There’s no difference to the viewer.

From the media planning view, most of everything the viewer now watches that is not Linear TV is on-demand, and is streamed at high quality, to the same TV screen in the same household via broadband, and can be correctly labeled as premium video content alongside linear TV, seamless by and large to the viewer, and to the long-form content they are used to on TV.

“We will increasingly hear the tag CTV replaced by streaming TV media or even OTT TV”.

In pursuit of a tighter definition of CTV for measurement purposes, as all content is streamed media delivered “over-the-top”’, that is by broadband and not through a platform operator, we will increasingly hear the tag “CTV” replaced by ‘streaming TV media” or even “OTT TV”.

Within this growing streamed media category, we have seen to date the emergence of predominantly video on demand (VOD) services, and whilst subscription services (SVOD) such as Netflix, Amazon Prime, and Apple TV have been successful for some time, the real audience action in the past two years has been the emergence of AVOD services that are free to watch and paid for by advertising, with exactly the same business model as a commercial TV broadcaster. These are app-based channels on Smart TVs like Samsung. Apps can be installed on the TV just like on a mobile phone and this creates the opportunity for brands and publishers to directly target their audiences on the TV, and potentially drive full-funnel engagement with that audience.

AVOD platforms are providing the audience battleground beyond traditional TV and creating the opportunity for brand advertisers to optimize their cross-media reach.

Inventory is growing all the time, and so is the audience. All major players have or are developing a position in premium streamed video. From broadcasters with VOD services (BVOD, broadcaster VOD), content publishers with TV apps on Smart TVs, direct-to-consumer brand apps like Disney+, and content aggregators like Samsung, Rakuten, Roku, and Pluto with either TV apps or plug-in devices.

Wherever TV, CTV, BVOD, or AVOD, the audience is now constantly moving and evolving, creating the advertising need for brand advertisers to map and understand their cross-media efforts, just as they currently expect to have viewing data to hand, from Linear TV channel broadcasters to ultimately be able to sell to their unique audiences.

Brand advertisers must have high-quality CTV data to first map and then manage this new TV frontier.

No more guesswork: brand advertisers need single-source, high quality, person-level data, to manage incremental reach and total unduplicated reach across CTV, BVOD, AVOD, YouTube, and on many platforms and channels, to understand how to attribute the performance of channels directly in the cost-effective delivery of their target audiences.

Measurement methodology for linear TV is historically household level and measurement of 1-2-1 ad exposure is not the building block of data reporting. By contrast, with the high-quality data now possible for CTV, an advertiser can seriously plan with accuracy how to use CTV to extend reach, the optimize 1+ reach of a campaign. This being what makes CTV advertising so valuable to advertisers, armed with the best data of course.

At last, a brand advertiser can use single-source, first-party data in planning tools to effectively deliver unduplicated 1+ reach

Many brands are now taking the guesswork and mathematics out of their pursuit of holistic cross-media reach equation with Beatgrid, using unique passive ACR measurement technology to overwhelmingly prove that single source, first-party data is the way to go with verified, data-driven proof of their CTV incremental reach performance on a given campaign.

Brand advertisers are increasingly challenged to optimize media spend, understand cost per reach and frequency metrics per channel, and understand average frequency management across a fragmented mix of channels now needed to drive 1+ reach. Robust data that can be systematically used to optimize the most effective way of spending a campaign budget on TV to build 1+ reach and not waste budget on duplicating the audience bought. Furthermore, it’s undeniable that collecting person-level ad exposure on a 1-2-1 content matching basis yields actual R&F data, real data. If all ad exposure is collected in the same source, it is first-party unduplicated data, and so it doesn’t need to integrate with other data sources to report Reach & Frequency.

All advertising audience measurement data is not equal

The holy grail in campaign cross-media measurement, especially for TV, comes down to data quality and brand advertisers realizing that all data is not equal though much of it is free. Provenance matters in measurement data:

All key tick boxes if cross-media advertising measurement is truly being taken seriously. There is no substitute for high-quality data because accuracy matters.

Join the future of cross-media audience measurement and optimize your CTV advertising with confidence and single-source transparency. 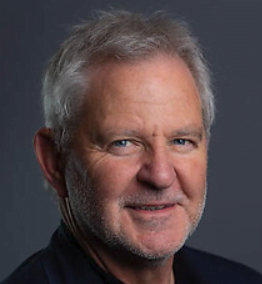 Beatgrid expands its team as proof of continuous exponential growth Subscribe to our newsletter to learn about the latest news and industry trends.